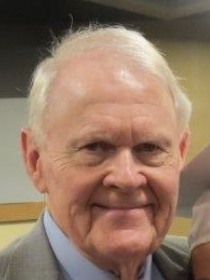 Thomas John Anderson, 87, of Ft. Wright, passed away on Wednesday, November 4, 2020 at St. Elizabeth Hospice in Edgewood. Tom and his wife, Eileen, were residents of Ft. Wright for over 40 years. He was born in Covington and was the oldest son of W. Ray Anderson and Virginia Bichlmeir Anderson. He attended St. Ann’s Elementary School, Covington Latin School, St. Xavier High School, and Xavier University.

Tom was a natural-born leader. He was extremely devoted to his family and was kind and generous to all who knew him. He was also known for his quick wit and sense of humor. He was a 50-year member of, and former treasurer of, the Kentucky Banker’s Association, past treasurer for the Notre Dame Academy Boosters, and former trustee of the KY Independent College Fund.

Tom’s hobbies included playing golf, thoroughbred racing, being a history buff, sports trivia, and watching sporting events, especially Cincinnati Reds baseball and Xavier University basketball. His greatest pleasure, by far, was his family. He treasured family gatherings, vacations, and outings more than anything else in life.

He was preceded in death by his parents, his brother, Ed, and his loving wife of 65 years, Eileen.  He is survived by his loving and devoted daughters, Donna Anderson Wood (A. T. deceased) of Taylor Mill, Judy Anderson Schieman (Danny) of Edgewood, and Sharon Anderson of Ft. Wright. He is also survived by his three grandchildren, Ben, Eric, and Abby Schieman, whom he adored, as well as his brother, Robert Anderson.

There will be no Visitation. Mass of Christian Burial/Celebration of Life is on Monday, November 9, 2020 at 7:00 PM in St. Pius X Church, 348 Dudley Road, Edgewood, KY 41017. Funeral guests will be required to wear a mask due to COVID-19 restrictions. Interment in St. Mary’s Cemetery, Ft. Mitchell. In lieu of flowers, memorials are suggested to St. Elizabeth Hospice, 483 South Loop Road, Edgewood, KY 41017 or to St. Vincent De Paul, 2655 Crescent Springs Pk., Crescent Springs, KY 41017.